A Treasure House of Memories

Arrowtown’s slogan is Where History Meets Nature, and it’s not hard to see why. Nature is all around in the mountains, waterways and woodlands, and the town itself is an outdoor museum of more than 70 heritage buildings. 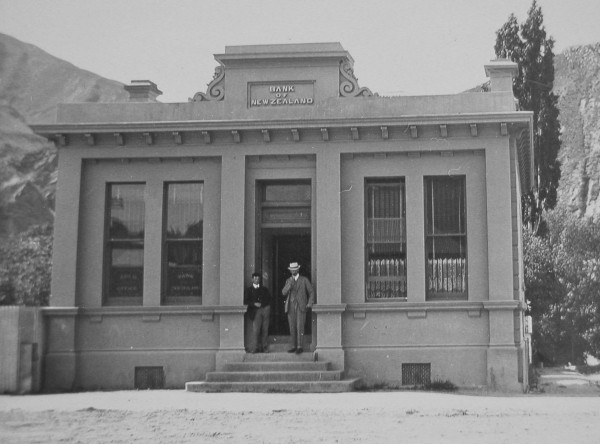 Bank of New Zealand in about 1910 (Lakes District Museum)

Our pioneer history
The history part comes alive in the heart of town at the Lakes District Museum. This interactive, family-friendly treasure house of our rich past is an experience you shouldn’t miss. The museum has been collecting, archiving and sharing the Queenstown Lakes District’s stories for over 70 years. Early Maori life, the harsh pioneering days of the European settlers, the gold rush that began in 1862, it’s all here, represented in working displays over two floors in three historic buildings.

This important district museum – it’s the only one in the Wakatipu – was established in 1948 as part of the centennial celebrations for the province of Otago. The first museum was an improvised affair in the billiards room of the Ballarat Hotel (now the Arrowtown Bakery) before it shifted to its present site in 1955.

The former Bank of New Zealand and the associated stables now house most of the collections. This neoclassical building was constructed in 1875 from a mixture of local schist rock, brick and timber. Designed by noted Dunedin architect Robert Lawson, it was modest by the standards of the time, but was still the grandest structure in Arrowtown.

As the gold ran out and the population declined, bank services were withdrawn and in 1953 the BNZ gifted the building to the fledgling Lakes District Museum. Since then the museum has grown into much more than a collection of mining artefacts. It’s an archive of documents and oral history, it owns and runs the Arrowtown Post Office, it runs a busy education programme. It’s a visitor centre, an art gallery and a place the community can come together.

A museum at risk
Today the museum is facing a crisis. Essential seismic strengthening work must be done to allow the museum to continue operating. This work doesn’t come cheap and the museum needs to raise $3.5 million to make the necessary alterations, including interior steel and concrete and a new structural mid-floor.

Along the way, the façade of the bank building will be returned to the original R A Lawson design, including added a parapet. Museum displays will be reinstated and upgraded.

The museum is a registered charity and relies on income from admissions, retail sales, grants, donations, bequests and the work of volunteers to operate. That’s why they need your help to carry on.

Have you ever enjoyed exploring the museum or wandering the art gallery, been helped by staff at the visitor centre or used the post office? Please consider making a donation at the Save the Lakes District Museum https://givealittle.co.nz/cause/help-save-our-museum fundraising page.

There has been a fire station on the current site since 1890. The hand drawn hose reel was used until the 1940’s.